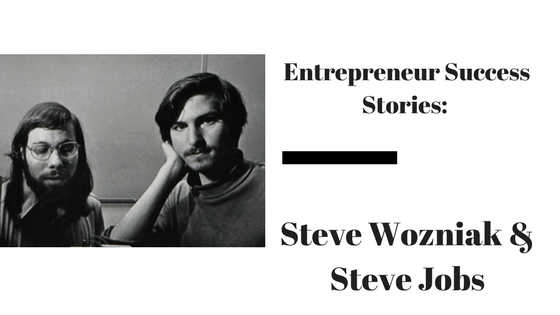 Steve Wozniak and Steve Jobs met when Steve Jobs began attending lectures held at Hewlett Packard, where Steve Wozniak worked. It was there that friendship all Apple users are thankful for began. Both men became very involved in a local organization called the Homebrew Computer Club. The two men experimented with different forms of hardware and software. Eventually, they built the first machine to carry Apple’s name in Steve Jobs’ garage in 1976.

The pair complimented each other well with Wozniak having a terrific mind for computer programming and Jobs’ marketing acumen brought success to the men almost instantly. They sold their first fifty machines to a dealer called the Byte Shop in Mountain View, CA. The first machines were known as “Apple Is” and sold for $666 each

The next year, the two men introduced the “Apple II” computer that contained color graphics and the electronics for the computer were located in a plastic case. Being the first mass marketed personal computer, this caught the attention of Mike Markkula. He provided $600,000 venture funding and signed on as Apple’s chairman. This helped push the company to go public in 1980.

Throughout the next decade, both Wozniak and Jobs left Apple under different circumstances. Wozniak’s departure was due to memory loss sustained from a plane crash and Jobs’ departure was due to a power struggle with then president and CEO John Sculley. After their departures, the men went on different paths. Wozniak finished his degree out and founded Wheels of Zeus (WoZ), Acquicor Technology, and Primary Data. Jobs purchased Pixar from George Lucas in 1986 for less than $10 million. The first film that was made under Jobs’ leadership was “Toy Story”, which went on to become a massive box office hit.

Jobs returned to Apple in 1996 as an advisor to the chairman and then, in 1997, accepted the role of chairman and CEO. Between 1997 and 2011, when Jobs announced his resignation as CEO due to health concerns, Jobs introduced the iPod, iPhone, and MacBook models that we use today.

Two men shared the same dream and found themselves, most likely unknowingly, creating the standard for personal computers and mobile platforms. Most technology users today use at least one product that stems from that first machine created in a garage in 1976 that has now built a lasting legacy for both men.