How to Teach Your Employees About Ethics 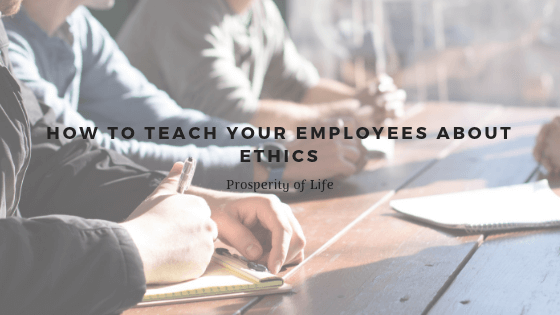 The lack of ethics and morals in today’s world permeates all factions of society. The entitled and greedy do what they want, to whomever they want, whenever they want for personal gain or pleasure. When their behaviors go unpunished, others join and form a gang-like deviant mentality. They pass their immoral values to the next generation and the next. Eventually, society crumbles.

The victims of the behaviors are often innocent and suffer a variety of damaging effects. When allowed to continue and grow like cancer, businesses, industries and communities may find themselves facing scandals and legal action. However, some believe that changes in the workplace may improve the level of ethics and values.

Human Resource professionals are commonly employed in many facilities. It remains their duty to establish the ethical and moral expectations for other employees by creating guidelines. Employees must also receive ongoing training in order to ensure that all stay informed of individual company policies and values. Only in this way, will supervisors, employees and co-workers have trust in one another and the willingness to work together to be productive.

There is evidence that some companies are taking steps in the right direction. The National Business Ethics Survey report that companies requiring ethics training rose from 74 percent during 2011 to 81 percent two years later. Three out of four companies claim to use disciplinary action against wrongdoers. A rising number of companies also include ethical behavior performance as part of employee evaluations.

Companies employ a number of techniques to establish and reinforce ethical behavior among their employees. For example, Dimension Data offers online ethics training, which the company believes makes the guidelines more memorable. The Intuitive Research and Technology Corp. provides live discussion sessions that entail providing examples of ethical situations that employees are likely to encounter and the actions that must be taken. Southern Co. in Georgia initiates contests and uses multimedia and social media applications to reinforce ethical values. The same company additionally invited a convicted felon to speak to employees concerning how someone might easily be led down the wrong ethical path and the consequences that follow.