Top 5 Richest Entrepreneurs in the World 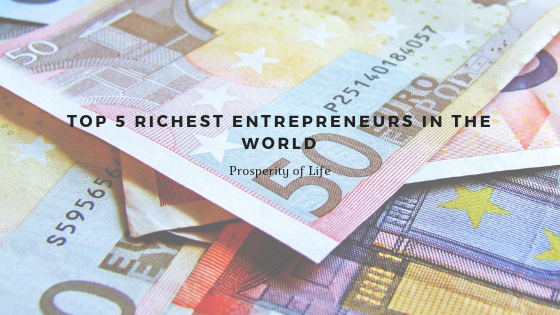 If you’re an aspiring entrepreneur, you may feel a little lost as to where to begin your journey. Perhaps you are in the midst of your business venture and feel like you should be seeing more revenue or success by now.

A lot can be learned about success by looking at other people’s work and lives. Do you research a product before you buy it, or a service you are thinking of trying? Similarly, researching those who are in positions you would like to see yourself in can be a good place to start for guidance.

Compiled below is a list of the world’s top 5 richest entrepreneurs whose stories and success can serve as a good source of inspiration:

His story and product are incredibly well known-and for good reason. Zuckerberg, the fifth richest entrepreneur in the world, amassed his fortune by creating a platform he believed the people around him needed. He used their input and the initial success to grow Facebook into an incredibly wealthy business. Zuckerberg is currently approximated to earn $71 billion.

Owner of LVMH, a corporation that owns companies such as Sephora and Christian Dior, comes in at fourth on the list with a fortune of $72 billion. Though he came from a successful family, Arnault’s savvy business decisions and knowledge of trends helped him grow his business into what it is today.

Buffett bought his first stock at 11 years of age and continued to see success throughout the rest of his life. He is owner and CEO of Berkshire Hathaway, which owns Duracell, Dairy Queen, and Geico. As third on the list, Buffett boasts a fortune of $84 billion.

At second place sits Microsoft creator, Bill Gates, whose net worth comes to a whopping $95 billion. Like many successful entrepreneurs, Bill Gates realized college wasn’t a good fit for him. He dropped out of Harvard to start Microsoft with friend Paul Allen. Nowadays, much of Gates’s fortune is spent on philanthropic endeavors.

Sitting at first place is Amazon founder Jeff Bezos with a net worth of $112 billion. A graduate of Princeton, Bezos first worked for a hedge fund before quitting to eventually start Amazon. The mega-popular brand started out of Bezos’ garage where he sold books online. He is the first billionaire to top Forbes’ influential top spot with over $100 billion, proving that sometimes the best things start very small.